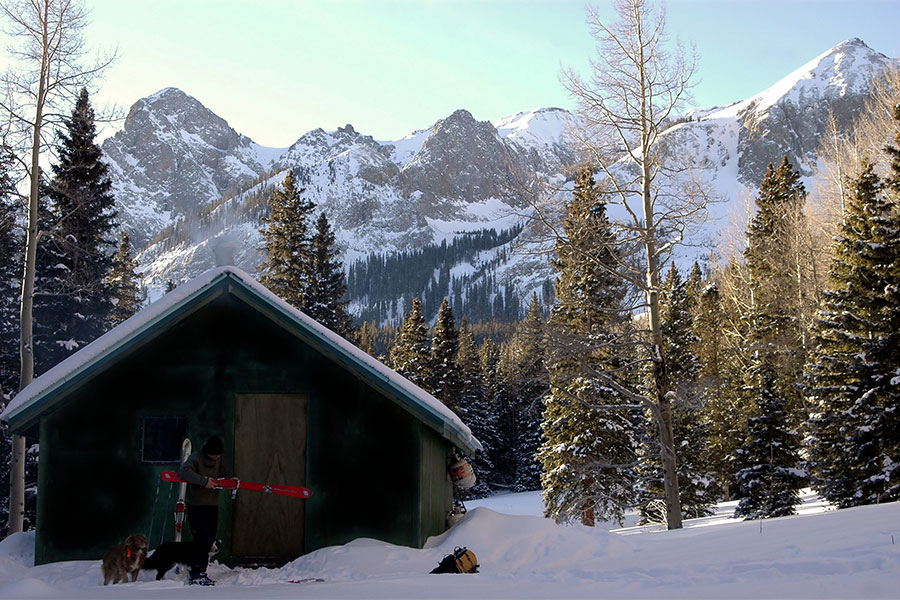 We have devoted over twenty-five years to creating and defining destination hut to hut skiing and mountain bike travel. In 1983, while on a climbing/skiing trip in Canada, Joe Ryan and his buddy were inspired to develop their own hut system. Joe had used the Canadian ski huts for more than a decade. A comprehensive year-round hut system was needed in the US and Joe was looking for a better ‘family job’ than guiding (his current occupation) as his daughter, Kelly, was on the way. That same year, Joe’s buddy was killed in an avalanche and their idea was put on hold.

A few years later, the idea was revived and put in motion. In 1987, San Juan Hut Systems was created on the north slope of the Sneffels Range in the Uncompahgre National Forest giving access to the remote Sneffells Wilderness and some of the best north aspect skiing in Colorado. We built five huts connecting Telluride, Ridgway, and Ouray along the historic Dallas Trail system that traverses the range. Additionally, all the huts have their own trail head access. With these trails, you can ski hut-to-hut, or just reserve one hut to base from over several days as in the European and Canadian tradition.

Permit requirements at that time mandated that the huts be removed at the end of each ski season. No place to store the huts in the summer, and no source for income in the summer months kindled the birth of the first hut–to-hut mountain bike system. The first route, starting in Telluride, transitions through multiple climatic and geographic zones finishing in Moab, Utah. Fifteen years later, we development a second route traversing from Durango, Colorado to Moab, Utah.

Our winter hut system offers over 60 miles of backcountry ski trails and access to phenomenal remote skiing and ski mountaineering. You are unlikely to cross another’s tracks. The north side of the San Juan Mountains present tremendous snow quality and first descent possibilities.

Our two 215 mile mountain bike routes provide a premium minimalist experience for the do it yourself adventurer. With the only destination hut-to-hut based system in the US, we take the weight out of bike touring by offering fully stocked huts and minimal route finding challenges.

Our most recent development is the destination huts which provide hikers, hunters, boaters, and runners incredible access to remote terrain with light loads.

Click on one of the links above to begin learning more about your winter ski or summer bike adventure, and to the reservation/calendar page to begin booking the trip of your lifetime.